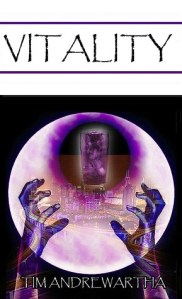 Set in an alternative version of the present day, Stylo Green moves to the city to work for Vitality. The company is making a magical drink which is welcome in the crime-ridden city where depression is spreading in the form of dark memories.

The New Movement Party hope to win the next election and clean up the city. Real food is banned so everyone eats plastic-tasting Easy Food except the few who dare to eat illegal fruit and vegetables available on the black market. Dr. Mooseball produces recreational narcotics which are legal and a popular way to relax while Soft Dreams employs people to suck up the ghosts that float around the city.

Emulla, the girl with the beautiful voice, is different from the others. She and Stylo hit it off, and Stylo’s packaging designs are chosen. Things seem to be going well for him, but he begins to notices something peculiar about his colleagues. The truth starts to unravel but not without bloodshed. When he finally faces his nemesis, nothing can prepare him for what he is about to discover.

Vitality is available as an ebook from the following websites:

You’re new around here? Well, there are a few things you ought to know.

Get caught with a piece of fruit, you’ll at least get a kick in from the cops. They catch you growing your own, you don’t even want to think about what they’d do to you.

That’s the way things are since Easy Food starting having an influence over the government. So most people eat the synthetic plastic meals and tune into the mind-shaping propaganda shown on TV.

However, there are some who, not believing real food’s bad for their health, are prepared to take the risks involved in trying some. These people find themselves in the Earth Club – a secret place where all kinds meet to share home-grown produce and drink bubbly, green liquid made from soil.

Also, controversially, there is a band called The Vegetables. They have albums such as The Giant White Radish and Salad Sadness – the latter’s cover featuring a picture of an eggplant, some broccoli and some asparagus. Surely it’s only a matter of time before they get banned. But in the meantime they remain the music of choice for the Earth Club goers who refuse to listen to the generic pop stars Flavour Behaviour currently top of the Easy Food charts.

So what are you going to do? Tuck into a plate of Easy Food and keep your eyes glued to the telly for the next thought update, or go out into the city looking for the Earth Club, real food and free thoughts? I know what I’m going to do. If you decide the same, I’ll see you there.

This was a glimpse into the world in which Tim Andrewartha’s debut novel Vitality is set. If you are curious to find out more, then click here.

After stumbling across Science Fiction Fantasy Saturday I thought I would post some of my novel Vitality.

His food arrived so he picked up his eating-sticks and watched the steam rise from the boiling soup like ghostly vapours seeping in from the after-life. This strange food was another aspect that made his new home feel more alien as he sampled the unpleasant, plastic taste for the first time.

The old Asian man resumed watching a small television which hissed and crackled as static invaded the picture.

“Do you remember what the city used to be like …” a man asked from under a furry moustache, emerging from a potato-shaped nose, “… before darkness descended, corrupting the minds of the weak?”

Glimmers of remorseful reflection appeared in the depths of the old Asian man’s eyes as he watched the screen, apparently transfixed by its emotive message

Check out the other snippets that have been posted here.

A short story set in the same world as Vitality.

The glow illuminated his parents’ faces as they chewed mechanically, their tired eyes focused on the screen. “5 people were killed and 3 were wounded when a man went on a random stabbing spree in a shopping centre today,” the reporter said. Neither Rixley nor his parents were shocked by such news which was a daily occurrence in their city.

Rixley looked down at the slime-covered cubes on his plate. His father had told him he would grow to like Easy Food. However, this was yet to happen. He used his fork to put some in his mouth, grimacing as he tasted the synthetic plastic flavour.

He thought about how all his parents did was watch TV and eat Easy Food in the evening after working all day at superfluous office jobs they hated. Had they ever hoped for any more from life or were they always prepared for such a meaningless existence?

Finally Rixley managed to swallow the last mouthful of his dinner. He got up and walked through to the kitchen, dumping his plate in the sink and getting out his phone. It rang a couple of times before his friend Bazton picked up.

“It’s a surprise. Meet me in the usual place.”

Rixley put on his coat in the hallway, glancing into the living room at his parents who were now watching a documentary about the risks of eating real food. His father looked over at Rixley. “Not going out, are you? Dangerous out there.”

“I can’t just stay cooped up in here every night like you and Mum. See you later,” Rixley said opening the door and stepping outside into the cold night without waiting for a response.

As he walked down the road, hands shoved into his pockets, he wondered what Bazton might have – some alcohol, Dr. Mooseball’s pharmaceuticals . . . or even some herb-sticks?

Bazton was waiting round the back of some run-down buildings.

“So what you got then?” Rixley asked.

Bazton reached inside his pocket. When his hand appeared it was closed. Slowly it opened to reveal two small round green things.

Rixley gasped before letting his breath escape, materializing in front of him as a ghostly cloud. “No . . . it’s can’t be. That’s not fruit, is it?”

Rixley frantically looked about to see if anyone was watching them. “We could get in so much trouble for this. Much more trouble than if we got caught with drugs or alcohol. People disappeared never to be seen again after police caught them with fruit. Where on Earth did you get this?”

“Overheard my brother speaking to someone on the phone . . .”

Rixley remembered meeting Bazton’s older brother, Skizzer. He was heavily built and had a tough-looking face. Not the kind of person that would be scared of authority . . . but Rixley had never expected him to be involved with natural produce.

“He mentioned some secret club,” Bazton continued, “where they go to eat real food.”

“No way.” Rixley had heard rumours of such a place . . . but finding out someone he actually knew went there made it seem more conceivably real instead of just a fantasy like he had thought.

“When Skiz went out I had a little look in his room. Found a whole bunch of grapes.”

Rixley shook his head. “We could get in so much trouble.”

“You must be curious?” Bazton held one of the grapes out to Rixley. “Let’s be honest. Easy Food is pretty horrible – despite what adults say. I’ve heard fruit is delicious. We have to try it.”

Rixley took the grape from Bazton and held it between two fingers. He gently pushed to test the strength of its skin which he suspected would burst if he squeezed too hard. He then held it up to his nose – it smelled fresh and sweet.

Electronic wailing pierced the airwaves. Bazton – who had gone white – threw his grape into the shadows.

The siren was getting louder. Rixley looked at the grape in his hand one more time before throwing it away as well.

Bazton was climbing over a wall. Rixley followed, struggling to pull himself up before jumping onto the other side. They ran down an alley that led them between some warehouses onto a busy road. A car swerved to miss them, the driver honking and shouting out of the window as they darted across and headed down another alley.

When they were no longer able to hear the siren they smiled at each other and slowed down, panting as they tried to get their breaths back. Rixley’s heart was still pumping at double speed, although his thoughts were now clearer. Suddenly something dawned on him. The police hadn’t actually been coming for them. They could have eaten those grapes after all . . . if they hadn’t been so scared.

“What are we going to do now?” Bazton asked as they came out of the alley onto a residential street.

“Well, it’s this way to my place. Might as well call it a night then.”

Rixley waved to his friend and turned to go the other way. The street reached a junction and he turned left before deciding to cross over and take a detour through a small park. He sat down on a swing and lent back, listening to it creak as he looked up at the blackness above and contemplated on the evening.

One thought kept resurfacing . . . what must it be like to eat real food?